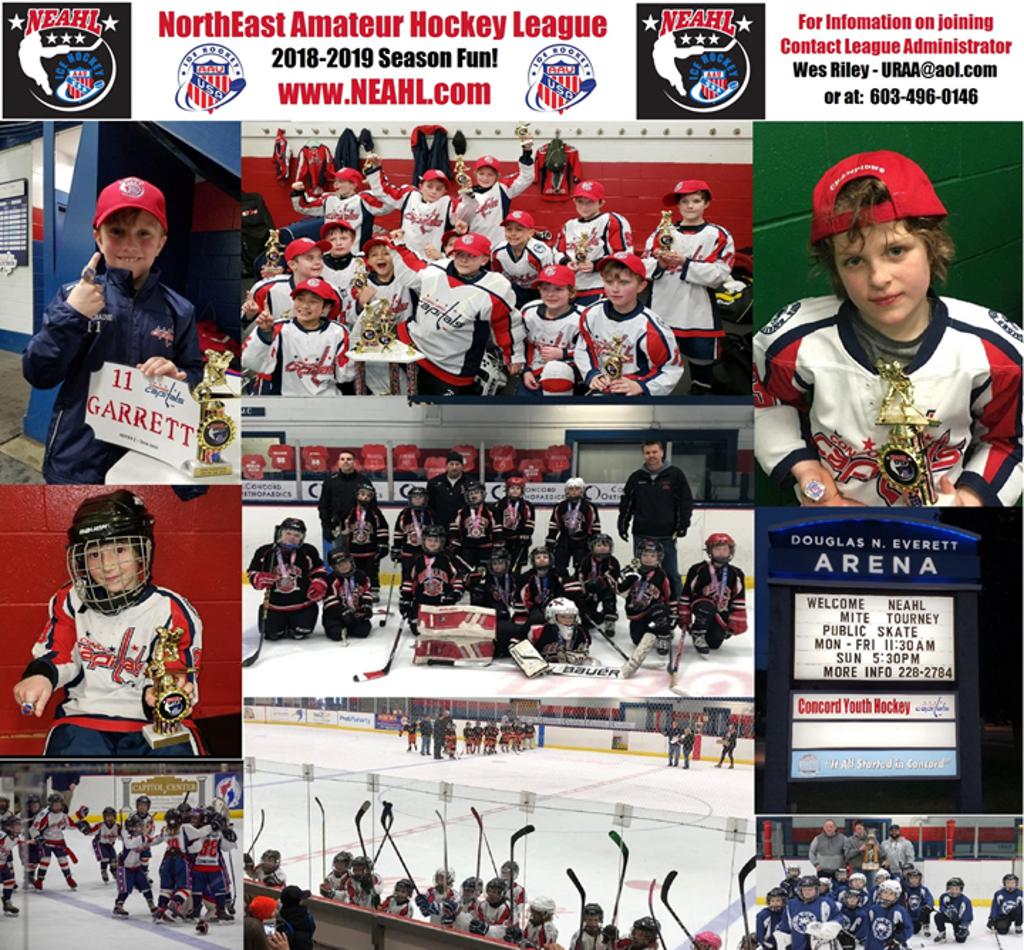 The 2018-2019 Season found us with another growth year in the NEAHL, doubling in size from the previous season.  The NEAHL had twenty-two (22) teams competing in four skill-level Mite Divisions including the new “Recreational” division.  The “Full-Ice” concept was a welcomed change for several new teams joining.

We started the season in October with a “Parity Jamboree” for all teams entering the league.  With some programs new to the league this past season, those teams had the chance to play various skill level teams.  By assessing the talent of each team at the “Jamboree,” teams are not playing in games that are not competitive during the season.  This past season saw six teams in the “A” division, six in the “B” division, with four in the “C” division, and six in the newly formed “Rec.” division.  The season ended in a “League Championship Series” in March where a re-alignment of teams into five divisions occurred.  Courtesy of AAU, divisional winners were awarded “AAU Championship Rings” with 2nd place finishers receiving AAU “Silver Medals.”  Over 300 players participated in the Championship Series!

NEW for the 2019-2020 season . . . .  An invitational “holiday” tournament - December 27-29 for AAU Mite teams.  To be held at the Everett Arena, Concord, NH.  THIS WILL BE A FULL-ICE TOURNAMENT open to the first eight mite teams registered and rostered with AAU Ice Hockey – “NEAHL” League Membership is NOT required.  More details to follow.

We also have new programs joining the league for the coming season.  Additional teams from NH, Massachusetts, and Maine have signed on.  We expect over 30 mite teams in the travel divisions with an additional 8-10 teams in the “Rec” division.  Travel Divisions in the “A,” “A/B,” & “B” divisions are Oct – March Full-Ice Game Seasons.  Division “C” and “Rec League” are “split season full-ice games” beginning in December and ending in March.  Game counts can range from a minimum of 12 league full-ice games to a maximum of 28 during the regular season.

The “NEAHL” is a not-for-profit league and only charges for operational expenses.  Player fees include “AAU Registration/Membership.”  Team fees are based on participation in League Tournaments, Jamborees, or other sanctioned “League” events and done so at a cost basis.  THERE ARE NO PROGRAM FEES or INITIATION FEES!!

League entry and registrations for the 2019-2020 season begins August 1.  For more information on joining the NorthEast Amateur Hockey League (NEAHL), contact League Administrator, Wes Riley, at 603-496-0146 or by email at:  uraa@aol.com  We would welcome your inquiry!

AAU HOCKEY, and the “NEAHL,” make full-ice Mite Hockey a fun and rewarding experience.  And as for “skill development” . . .  Practices make the player!!

And then, the “Players get to PLAY the REAL GAME” - no matter their age!!